A lot of Windows users have doubts about whether the rundll32.exe process that they see in the Task Manager is a genuine process or a virus. The reason behind these inquiries is the paranoia created by fraud tech support companies who misuse the name rundll32 to create malicious processes. This discussion is a part of our series on files and processes that are usually genuine but have been maligned by fraudulent companies to sell their products.

What is the rundll32.exe process Windows users must have encountered a lot of DLL files. These DLL files store application logic entities and these entities are needed by applications on the system. Many applications will cease to work if they are unable to call upon the associated DLL files.

Rundll32.exe is a process which executes DLL’s and places their libraries into the memory so that they can be used more efficiently by applications. This program is important for the stable and secure running of your computer and should not be terminated. In short, it triggers the execution of DLL files. Since launching a DLL file directly is not possible, and this makes the rundll.exe process critical. If you kill the rundll.exe process, you wouldn’t be able to run any application on the system.

Can I kill the rundll32.exe process?

Yes, you can kill the process using the Task Manager, but as mentioned earlier, it would make a lot of programs unusable. It could even make the system unstable and restart your system. So should you? No – if it is the legitimate system file.

Is rundll32.exe a virus

The .exe extension on a filename indicates an executable file. Executable files may, in some cases, be malware, and malware is known to take the names of other legit files. So, in this case, the first thing you need to do is search for and locate the rundll32.exe file using Start search. If it is found in the WinSxS, System32 or SysWOW64 folders, and its Properties indicate that is a Microsoft Windows operating system file named Windows Host Process then it is the legit Microsoft process. But it it is found in any other folder location, it could well be malware.

The rundll32.exe process is not a virus. However, it isn’t necessary that the process we observe in the Task Manager is the original process. At times virus or malware could be named rundll32.exe to conceal it.

If you see it in your Task Manager, then to check the file location of the rundll32.exe file, right-click on it, select Open file location and then its Properties. 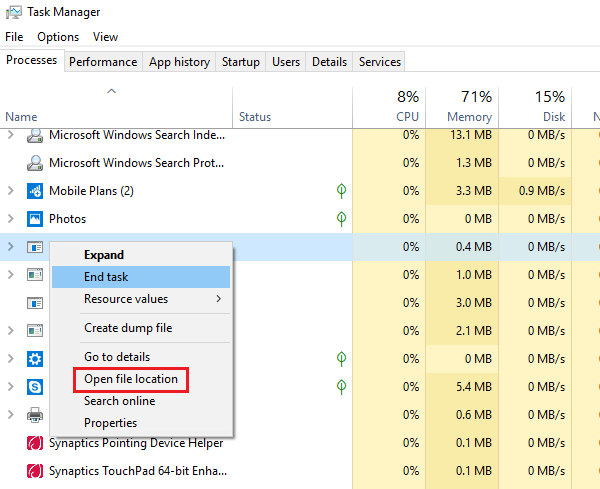 If you suspect the file to be a virus, you should run a full system anti-virus scan.