If WSReset.exe is not working on your Windows computer, this post will interest you. WSReset exe is a command-based tool that is inbuilt into Windows. This tool is used to reset or clear the Microsoft Store cache and is primarily used to troubleshoot Microsoft Store issues. 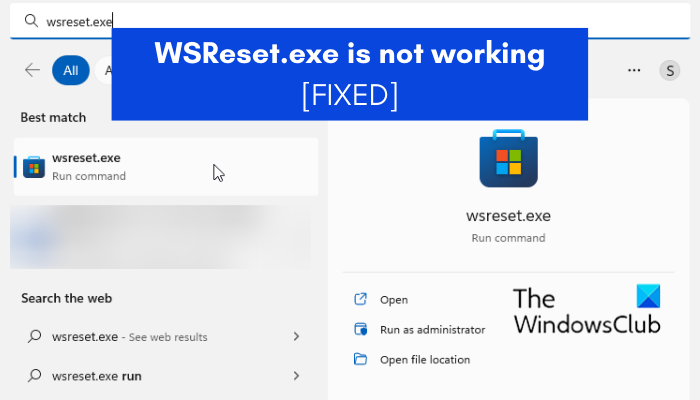 How do I run WSReset exe?

But, what to do if you are unable to run WSReset.exe on Windows 11/10? A lot of users have reported that WSReset.exe doesn’t work on PC. One of the affected users says on Redditcom:

I type wsreset into command prompt and tried Windows R wsreset.exe but nothing happens I wait for 15 mins and the store hasn’t popped up

Now, there can be different reasons why WSReset.exe is not working properly. It could be due to corrupted or missing system files, malware infection, corruption in the Microsoft Store app itself, etc.

If you are also experiencing the same issue, all you have to do is follow this guide. Just use the fixes we have mentioned and run WSReset.exe without any issues.

Fix WSReset.exe is not working on Windows 11/10

If the WSReset.exe tool is not working on your Windows 11/10 PC, you can use the below fixes to resolve this issue:

1] Use some generic troubleshooting methods

To start with, you can try some standard troubleshooting practices to fix the issue at hand. The most common method is to restart your computer. It works in many cases and there is no harm in doing so. So, just reboot your computer and then try running the command to see if it is working or not. Once done, try running the WSReset.exe tool and check if it is working fine or not.

Once the command is completed, open WSReset.exe and see if it works fine or not. But, if it doesn’t help, you might need to perform a Deployment Image Servicing and Management (DISM) scan to restore system health. Open Command Prompt with admin rights and enter the below command:

Hopefully, WSReset.exe will now work fine on your PC.

Read: Fix Microsoft Store is not opening after reset. 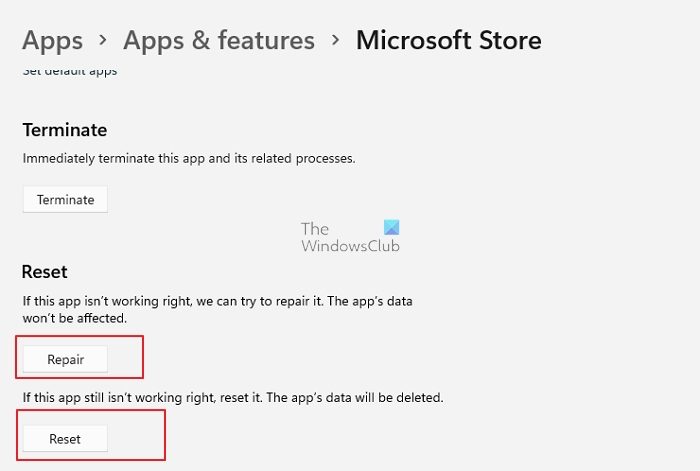 If WSReset.exe is still not working, you can reset Microsoft Store using the Settings app. It will restore the original state of the Microsoft Store and clear corruption associated with the app. To do that, you can follow the below steps:

If the problem remains the same, you can try reinstalling Microsoft Store through Powershell. This “WSReset.exe is not working” issue might be caused due to some corruption in the app. Hence, if the scenario is applicable, you can reinstall Microsoft Store using a command. Let’s see how.

Now, type the following command and press the Enter button:

Let the command finish and it will reinstall Microsoft Store. You can then restart your PC and check if the problem is resolved or not.

If none of the above solutions worked for you, Repair Install Windows using Media Creation Tool. It will reinstall Windows while keeping your data. If the problem is caused because of system corruption, this will fix the issue.

How do I fix the Microsoft Store Refresh page?