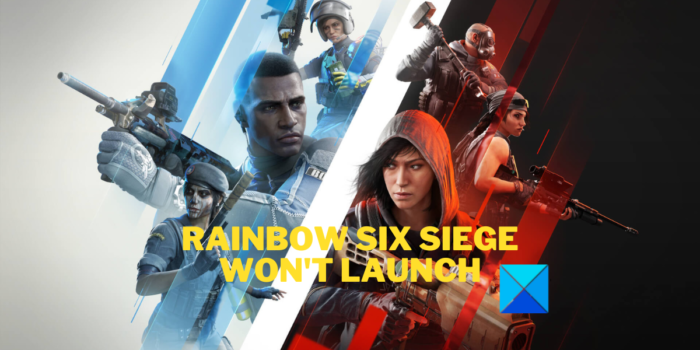 One of the common reasons for this issue is that your PC doesn’t meet the system requirements of the game. Other than that, outdated and faulty graphics drivers also can prevent Rainbow Six Siege from launching. Some other reasons for the same include antivirus/ firewall interferences, missing administrator rights, corrupted Microsoft Visual C++ Redistributable, or damaged game installation.

Now, if you are one of the affected users, this post is what you are looking for. Simply use the fixes we have mentioned in this post and you will be able to launch Rainbow Six Siege without any issues.

Here are the fixes you can use if the Rainbow Six Siege game is not launching or opening on your Windows PC:

If your computer meets the above system requirements of Rainbow Six Siege but the game still doesn’t open, you can move ahead and use the below fixes to resolve the issue.

If you are still unable to launch the Rainbow Six Siege game, move on to the next potential fix to open the game.

Well, you must have up-to-date and clean graphics drivers to be able to launch and play your video games on your PC. If Rainbow Six Siege is not launching on your PC, there is a possibility that your graphics driver is out-of-date or corrupted. Hence, in case the scenario is applicable, all you need to do is update our graphics driver or reinstall them to fix the issue.

Update your graphics driver by using the Settings app;

Intel, NVIDIA, and AMD graphics card users can also visit their official websites and download and install the latest version of the graphics driver directly from the websites.

If you use Ubisoft Connect to play Rainbow Six Siege, use the below steps: Steam users can use the below steps to verify and repair the game files:

Here are the steps to verify the integrity of the game files of Rainbow Six Siege:

If the game files are clean and still you can’t open Rainbow Six Siege, there must be some other underlying reason for the issue. So, you can use the next potential fix. To repair Microsoft Visual C++ Redistributable, follow the below steps:

If repairing the package doesn’t help, you may consider reinstalling it. So, uninstall Microsoft Visual C++ Redistributable and then download and install the latest version from the official website of Microsoft. Hopefully, you will be able to open Rainbow Six Siege now.

Here’s how you can allow Rainbow Six Siege through Windows Firewall:

Similarly, if your antivirus is causing the issue at hand, add Rainbow Six Siege to the exception or exclusion list of the antivirus.

7] Reinstall the game or game launcher

The last resort to fix the problem is to reinstall the Rainbow Six Siege game. It might be the case that the game’s installation is corrupted which is preventing it from being launched. Hence, uninstall the game and then reinstall it to fix the issue.

If reinstalling the game doesn’t help, there are chances that the fault lies within the game launcher. Some Ubisoft Connect (previously known as UPlay) users reported that reinstalling it has helped them fix the issue at hand. So, you can uninstall Ubisoft Connect from Settings > Apps > Installed apps, and then download the latest version from its official website and reinstall it. Hopefully, this will fix the issue for you.

How do I fix Siege not opening?

If Rainbow Six Siege is not opening on your Windows PC, ensure that your computer meets the system requirements to run the game. Apart from that, you can try running the game with administrator rights, updating your video drivers, or verifying and repairing the game files. You can also temporarily disable your security program and check if the issue is resolved. The detailed fixes are explained above, so you can use them.

Why does R6 keep crashing when I open it?

Outdated graphics drivers can cause Rainbow Six Siege to crash. It might also crash due to corrupted game files, lack of admin rights, software conflicts, antivirus interference, etc. Also, if there are too many background applications running on your PC, the game might crash.