AMD is among the popular graphics card manufacturers. The graphics card manufactured by AMD provides gamers with a superb gaming experience. A graphics card is a piece of hardware that is responsible for rendering images and displaying high-quality photos and videos. Undoubtedly, a graphics card is the best friend of a gamer. In order to establish a communication link between a graphics card and an operating system, you need to install the required driver. When the driver malfunctions or gets corrupted, the respective devices do not work properly. Such an issue is experienced by gamers who have installed AMD graphics cards on their systems. According to them, the AMD driver crashes 10 to 15 minutes after launching a game. If you are facing such a problem, the solutions provided in this article may help you fix it. If your AMD driver crashes when playing games, here is how to fix the problem. 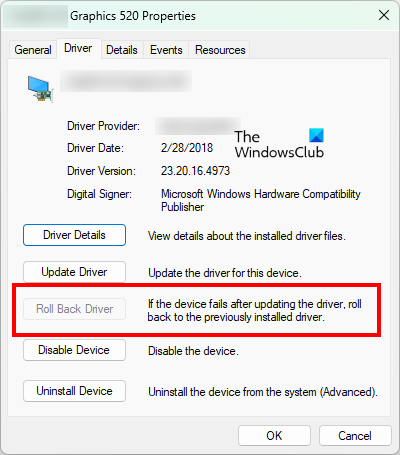 The steps to rollback AMD graphics card driver are as follows:

The roll-back option installs the previous version of the driver on your system.

Another solution to get rid of this problem is to download or update AMD Drivers with AMD Driver Autodetect. AMD Driver Autodetect will detect your machine’s graphics card and Windows operating system. If there is a new driver available, the tool will download it with a click of a button and start the installation process. The auto-detect tool gives you the option to download the latest official driver. In case you are interested, AMD Clean Uninstall Utility can help you remove AMD driver files completely.

This solution has fixed the problem of many users. It should also help you.

The Enhanced Sync or VSync is a feature of AMD graphics cards that matches the frame rate of your game with the refresh rate of your monitor and provides you with an ultra-fast and tear-free gaming experience. Some users have experienced issues with this feature. When they turned off this feature, the problem disappeared. 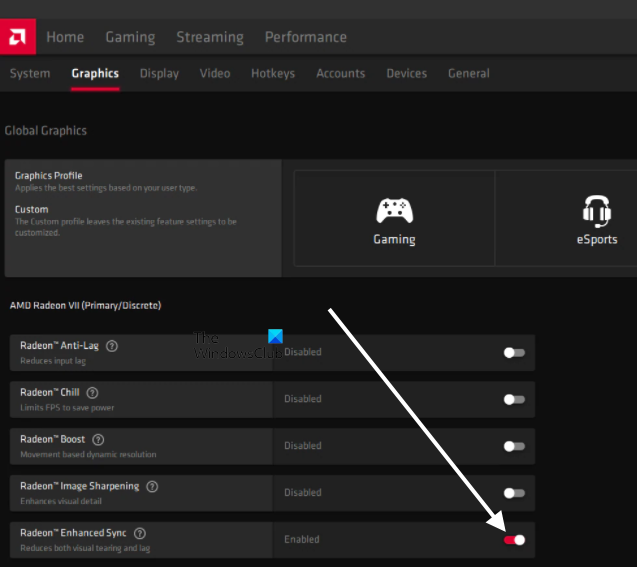 If you have enabled the Enhanced Sync feature, we suggest you disable it and then check if it fixes the problem. To turn off AMD Enhanced Sync, open the Settings panel of your AMD graphics card software and then select the Graphics tab. After that, click on the button next to Radeon Enhanced Sync to turn this feature off.

4] Use Dual Rail PSU (if your graphics card supports that)

If your graphics card is connected to PSU via a single cable split into two ends, replace it with two separate cables. But for this, you need a dual rail PSU (Power Supply Unit). The electronics components in a PC need DC input current to operate. That’s why a PSU is installed on every computer so that the incoming AC current is converted into DC output current.

A Graphics card requires 12 V DC input. A Dual Rail PSU has two 12 V DC outputs. In a Dual Rail PSU, the incoming current is distributed to two 12 V outputs, hence, the two 12 V outputs deliver less current as compared to the single rail PSU. The current is directly proportional to Power and Power is directly proportional to Heat generation. Therefore, less current means less power consumption and less power consumption means less heat generation. That’s why if you connect your graphics card to a Dual Rail PSU by using two separate cables, your graphics card will consume less power due to which the amount of heat generated is less. This decreases the chances of crashes while playing games.

Another cause of this problem is the outdated or corrupted chipset driver. We suggest you update your chipset driver from the Device Manager. The steps for the same are given below:

After that Windows will search for the latest version of your chipset driver and install it. Alternatively, you can also install the chipset driver manually by downloading it from the manufacturer’s website.

Why does my game keep crashing AMD?

Before you purchase a game, you should check its hardware requirements. The most common cause of game crashes is unsupported hardware. If your computer is not capable of running the game, the game will crash. If your game crashes despite your system’s hardware being capable of running it, your graphics card driver might have been corrupted. You should update your graphics card driver from the Device Manager.

How do I fix my AMD driver bug?