There are reported cases whereby Xbox gamers on console get the response Sorry, we can’t show Game Pass games right now when trying to access the Game Pass library on their gaming system. This post provides the most suitable applicable solutions for speedy resolution of the issue. 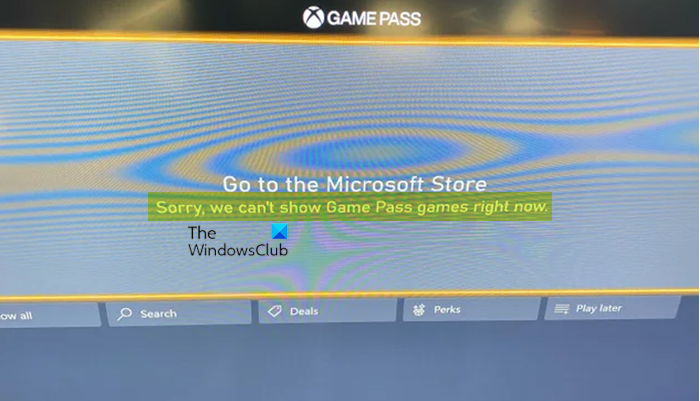 If you are seeing the message Sorry, we can’t show Game Pass games right now when you access the Game Pass library on your Xbox Series X|S or Xbox One console, you can try the suggestions below and see if that resolves the issue on your gaming device.

Let’s take a look at the description of the above-suggested fixes.

This is more of a workaround than an actual solution to the problem, as it requires you to try accessing your library via My games & apps. Some affected users reported they were unable to access the game library via the Guide or the Game Pass tile added to the Home screen but were able to do so via My games & apps from the Home screen. Some other affected users mentioned they were able to access and download games by clicking the Show all button on the error message dialog screen. To rule out the possibility of Xbox Live service outage, which usually is the case, you can quickly check the Xbox status page at support.xbox.com/en-US/xbox-live-status. If indeed there’s a service outage, there’s nothing much you can do but wait for the services to be restored and then try again. On the other hand, if all services are green and available but you still can’t access the Game Pass library, move down to the next solution. Depending on your internet device, refer to the instructions manual or search online with your preferred decision engine on how to power-cycle your modem or router as the case may be. If the issue persists, you can proceed to test the network connection on your Xbox console. Do the following:

If the connection test is successful, your console will connect to the Xbox network. If the console passes the network connection test, but the issue in hand is still present, you can restart and/or powercycle your Xbox console.

To manually power cycle your Xbox console, do the following:

Once the restart or powercycle is finished, see if the issue you’re currently facing is resolved. Otherwise, proceed with the next solution.

Read: Game Pass not launching games on Xbox or PC

You can reset your Xbox console and see if the issue in hand will be resolved. Make sure to select the Reset and keep my games & apps option. If the reset operation wasn’t helpful and you have exhausted all the suggestions provided in this post, but the issue is still unresolved, you can contact Xbox Support for additional assistance.

Most commonly, Game Pass is missing a key security WU infrastructure update that it needs. Unless your system has it, you can expect certain games (particularly games from first-party studios) to refuse to launch. To fix this, you need to install the latest Windows infrastructure update you are missing.

Why can’t I play Game Pass games when I have Game Pass?

If a game was installed from the Xbox Game Pass catalog but will no longer play, make sure your Xbox Game Pass subscription is active and that the game is still in the current catalog.

What happened to Xbox Game Pass?

Microsoft has rebranded Xbox Game Pass for PC to separate the subscription service more clearly from its console hardware. The platform holder announced a name change for the PC version of the service to simply PC Game Pass, removing Xbox from the brand name.