If you have always thought of writing posts or email or anything on your Windows 10 computer using voice, Microsoft has rolled out a native Dictation feature in Windows 10. This tool can translate your spoken words into text, and it works in any app where there is a text input, and can also be used on the desktop to launch settings and other things.

In this Windows 10 tutorial, we will talk about how you can use the Dictation Tools to improve your productivity. A small caution that it may take some time to get used to the whole experience. Also, you will need a microphone to get everything done. Select a text area like a Word document or email where you want to type. Then to start the dictation tool, press Windows key + H on the keyboard. This will launch the voice dictation panel which will have a keyboard and blue color microphone icon. It’s basically the touch keyboard that shows up in tablet mode for 2-in-1 laptops.

The blue microphone icon will immediately get into “Listening” mode, and you can start your dictation right away. However, writing isn’t just putting in random words you speak; instead, you need to add punctuation and other grammar aspects.  We will talk about the dictation commands at the end of the post.

Once done, all you need to say is “stop dictating“, and then stop saying. Once the tool gets the silence, it will stop converting speech to text.

While the keyboard is compact, but it is expected to occupy part of your screen. This means it will block your view of whats in the document. Suggest you drag, and put it under the taskbar, so it disappears from the visuals, but the dictation keeps working.

This is the list of dictation commands you will need to use if you are planning to use this tool most of the time. Say for example if you want to delete a word where your cursor is, just say Delete word, and it will be done.

What do I feel about it?

After using it for a couple of different things, I can say that it works. But there are caveats that Microsoft needs to fix. Dictation should work in conjunction with features of documents. Say, for example, if the first alphabet of a word needs to be in the capital, I should have to put my time into doing that. The same should happen for comma and punctuation.

There is another drawback. The tool doesn’t learn your speech. There is no speech training program with this which increases the chance of error.

However, I am guessing this is more of a general tool and is not built for professional work. But then what’s the point? If you been using Windows form a long time, Windows already had a Speech Recognition tool which also helps in executing key commands, many other things. However, this is limited to the only control panel.

Nevertheless, you can always use this tool to write long emails, and document things. Later on, you can spend some time fixing whichever needs a correction.

The Dictation tool is available in US English only. To use it, your PC needs to be connected to the internet. To dictate in other languages, use Windows Speech Recognition. 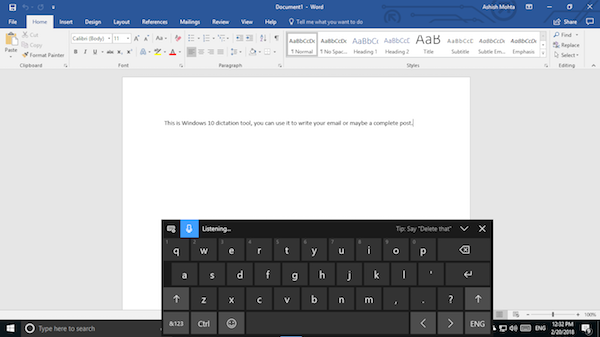