What is a Wireless Router? The Router is a device that creates a network so that all the appliances within its range can connect to it. It will be connected to the Modem via an ethernet cable provided by your Internet Service Provider (ISP). The network that’s created here is called LAN or Local Area Network.

Earlier, an ethernet cable was required to connect to the network. The cable was attached to the router and the device you wanted to use the Internet on. However, nowadays, routers are primarily used to create a wireless network, also known as Wi-Fi.

Do check: What are the differences between 2.4GHz and 5GHz Wi-Fi bands?

Wireless Access Point or WAP, as the suggests, is a device that creates an access point that other devices can use to connect to the existing wireless network. It is attached to the router via an ethernet cable. So, basically, it’s taking the wired Internet and then broadcasting it.

Now, you may be wondering why you need a Wireless Access Point? The main purpose of the equipment is to increase the range of the network. If you are living in a house with a lot of dead spots or in a multi-store office that requires a lot of people to use the same network, you need to get yourself Wireless Access Points. They will extend the WiFi range at the same time, allowing more people to connect to the network.

The following are the advantages of Wireless Access Point or WAP.

Also read: WiFi Extender vs WiFi Repeater – Which one is better? 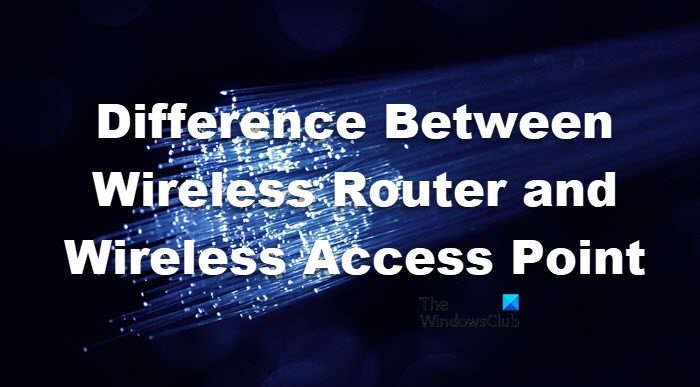 A Router is a more common device of the two, and most probably, you too have a wireless router at your home. Whereas, Wireless Access Point is for a more specific crowd. It is for all the users who are tired of having multiple dead zones in their office making a big chunk of the office redundant. However, most people don’t even need WAP, a proper placement of the router is all they need to cover all the zones. If you are in an apartment, you don’t even have to think about proper placement as most modern routers have an excellent range.

The main difference between both devices is pretty clear. A Router is used to initiate the Local Area Network, whereas, Wireless Access Point is used to extend it.

Access Point and Routers are made for specific purposes. Router creates the network that your devices connect it, wired or wirelessly. On the other hand, WAP or Wireless Access Point is used to increase the range of the network.

Do I need a Router if I have a Wireless Access Point?

Yes, a Wireless Access Point can not function without a router. They can’t be connected to the modem straightway, instead, an ethernet cable is attached to WAP on one end and the router on the other. Then, that Router provides the Internet to WAP, which it accepts and broadcasts. So, you should not get a Wireless Access Point without having a Router.

Read: How to Enable or Disable Access Point Isolation on Windows computers

Can any Router be used as an Access Point?

There are some routers that can be used as an Access Point, but not all of them. If your Router can also be used as a WAP then it must be a feature and since we are living in the age of capitalism, you can check the box to see if the text saying “Wireless Access Point” or similar is inscribed there. If there is, then check which mode you need to opt to do the same. Now, do the regular setup, that’s connecting your modem to the router and then the router to WAP via an ethernet cable, and you will be good to go.

Related: How to fix WiFi problems in Windows 11/10.