Xbox has evolved from just being a gaming console to a complete social experience around gaming. Starting with Xbox One, anyone with Xbox Live has more access to consuming more content, audio chat with gamers you don’t even know, make friends, what their videos on Mixer and so on. This also means you will end up meeting rouge players which don’t really come to bring good to the community but do all sort of nuisance.

Keeping this in mind, Microsoft does have inbuilt tool report such kind of activities, and gamers along with the content to make sure your experience remains on par, always. Microsoft has a detailed code of conduct on their website which warns of things you should not be doing in the community.

If you have a bad experience with an Xbox Live gamer, you can report about him using his Gamertag, right from the Xbox One console. Xbox Live lets you report for many reasons like:

Report & Block a Gamertag on Xbox Note: When you report a gamer or content, nothing happens instantly. Microsoft has their own system to check on how many people are reporting, and sometimes they are manually checked so nobody cheats with the system. However, when the number of reports increases for a gamer, you do get to see the notice which might say “Avoid” or similar message to give you a warning.

If you cannot find a gamertag in your “recent players” list, you can always make a search from the People section. Look for a label which says “Find Someone”, and then you can search using the exact gamertag. 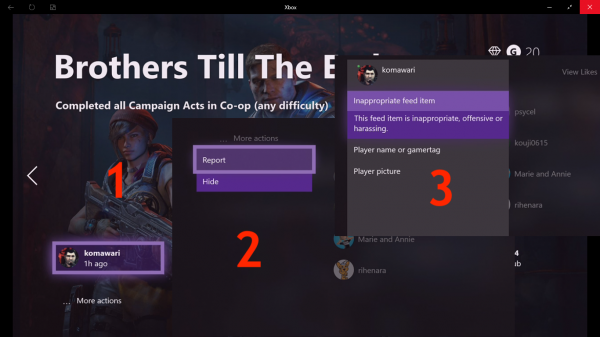 Xbox Community section allows you to share your game clips, images, achievements, and so on to your friends or to everyone on Xbox Live community. If you find there is something offensive about it, you can report about it.  Take a look at the screenshot below:

This will look almost similar no matter from where you reach it. So the action will be the same in all cases.

How to Report a Message in Xbox

Xbox Live has an in-built messaging system which allows any of your friends, and if you have your privacy settings open, anybody who knows your gamer tag can send you audio, or a text message. You can report them too.

How to Report a Club on Xbox

Clubs are new features in Xbox One which allows you run a virtual club for any game you like. This helps in finding new gamers, a lot of interesting conversations, and so on. In case you find a Club which is offensive, you can report it.

Similarly, Look for Group posts can be reported.

Xbox Live has a system in place to report all contents which you find offending, however, be warned that do not misuse the feature, else karma will follow you back. Any time you report a person, give some thought about it because unlike blocking a message, this cannot be reverted back. If you really think that things went south, and the person deserves it, then take your bold step. 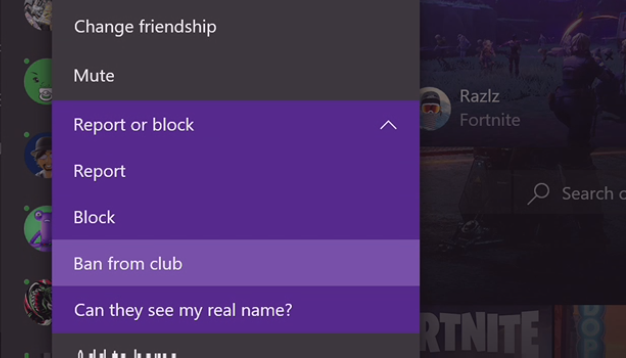