DOS stands for Disk Operating System. Earlier, before the invention of Windows OS, computers run on the Disk Operating System. The family of DOS includes MS-DOS, PC-DOS, Free-DOS, etc. Among these operating systems, MS-DOS was the most popular operating system and it was developed by Microsoft. Microsoft ended DOS after the release of Windows 95. You can still run DOS programs in the 32-bit Windows 10 operating system by using the NTVDM technology. NTVDM stands for NT Virtual DOS Machine. It is not installed in Windows 10 by default. When you run a DOS program on a 32-bit Windows 10 OS, you will receive a popup to install NTVDM. If we talk about 64-bit Windows 11/10 OS, you cannot run DOS programs. In this article, we will see how to run old DOS Programs in Windows 11/10 using vDOS or DOSBox. How to run old DOS Programs in Windows 11/10

As explained above, you cannot run DOS programs on Windows 11/10. If you try to do so, you will receive the following error message:

This app can’t run on your PC

To find a version for your PC, check with the software publisher.

If you want to run the DOS programs on Windows 11/10, you need to install a DOS emulator software. We will talk about the following two DOS emulators for WIndows in this article:

1] How to run old DOS programs on Windows using vDOS

vDos is one of the DOS emulators for Windows that lets you run DOS programs on your Windows device. You can download it from softpedia.com for free. After downloading the vDos file, double-click on it to install it on your PC.

When you run vDos for the first time, it will load a sample program. You can clear this sample program by following the steps written below: 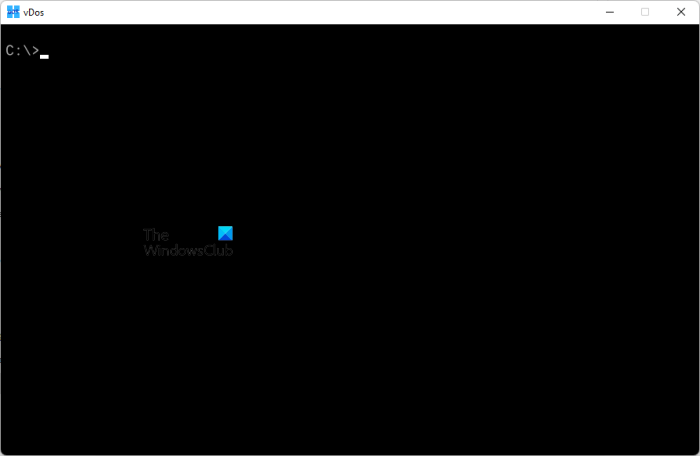 Now, when you open the vDos application, you will see a clean interface as shown in the above screenshot.

To run a DOS program using the vDos application, you have to place the executable file of the DOS program in the vDos directory. Below, we have explained the entire process for the Chess DOS game.

Open the vDos directory and create a new folder. Name this folder. Here, we are running the game Chess, therefore, we named the newly created folder as Chess. In the above command, replace the folder name with the name of the folder containing the DOS program file. For example, in our case, it is the Chess folder. Therefore, the command is: In the above command, the cd stands for change directory. It is used to change the directory. Now, type the name of the executable file inside that folder along with the extension .exe and then hit Enter. After performing the above steps, vDos will run the DOS program.

2] How to run old DOS games on Windows using DOSBox

DOSBox is another free DOS emulator that lets you run old DOS programs and DOS games on Windows computers. You can download it from its official website, dosbox.com. The method to run old DOS games and programs on DOSBox is different and a bit tricky from the vDOS.  We have explained the entire process below.

After downloading the DOSBox file from the official website, install it on your system. Unlike vDOS, you need not place every game in the directory where DOSBox is installed. You can directly mount the drive where you have placed all your games. Follow the steps written below to run DOSgames or programs using DOSBox.

Let’s see all these steps in detail. Before you begin, do the following:

Open DOSBox by double-clicking on its desktop icon. After launching the DOSBox application, you will see Z:\> on its interface. Now, you have to mount the directory where you have placed the old DOS games. I have placed the old DOS games in the F directory inside the OldGames folder. Do note that there should be no space in your folder name, otherwise you will get an error. To understand this, see the following two examples: If you type the latter path, you will receive an error message because, in this path, there is a space between The Windows Club (see the above screenshot). To make it simple, it will be better if you make the path as short as possible. For example:

Now, I think you understood how to name your games folder and where to place it in your drive. Let’s see how to mount the games folder.

The command to mount the games folder looks like this:

I have created the games folder with the name OldGames in the F drive. Therefore, the command to mount that folder is:

You will see the complete command as:

DOSBox does not accepts the “copy and paste” command. Therefore, you have to type the entire path using your keyboard. That’s why I suggested you create a games folder in the directory in such a way that its path is as short as possible.

After typing the above command, hit Enter and you will see the following message (if the command is executed successfully):

After mounting the drive, the next step is to call the drive where you have created the games folder. To do this, simply type the drive letter with a colon after Z:\> and press Enter. In my case, it is the drive F. Therefore, I typed F: (see the below command to understand this: The complete command that you will see on your screen is:

The above command will change Z:\> to F:\>. Now, the next step is to execute the command cd (change directory) to make DOSBox locate the games folder. The command should be like this:

I wanted to run the beetris game. Therefore, the command that I entered is:

In the above command, beetris is the folder that contains the beetris executable file. The entire command should look like this:

Do note that there is a space between the cd and the name of the game folder. After typing the above command, hit Enter and then type the name of the executable file along with the .exe extension. The entire command that you should see on your screen is: As you press Enter, DOSBox will launch your game. Enjoy playing your favorite DOS game on your Windows computer.

I tried both vDOS and DOSBox emulators on my Windows laptop. DOSBox is capable of playing any DOS game or program. On the other hand, vDOS displays error messages with some games and programs. The DOS games and programs that showed errors in vDOS ran successfully in the DOSBox application.

Which one of these emulators is your favorite?

Yes, you can play old DOS games in Windows 10. For this, you need to install DOS emulator software on your Windows computer. vDos is among the free DOS emulators for Windows. You can install it to run old DOS programs and games on Windows 11/10. DOSBox is good too!

Read: How to get back the classic Solitaire and Minesweeper on Windows 11/10