Keys with an Fn key or F Lock provide two sets of commands for many keys on a keyboard. This includes the top row of standard function keys (F1–F12). In this post, we will show you the methods on how PC users can Lock and Unlock the Function (Fn) key in Windows 11 or Windows 10 computers. 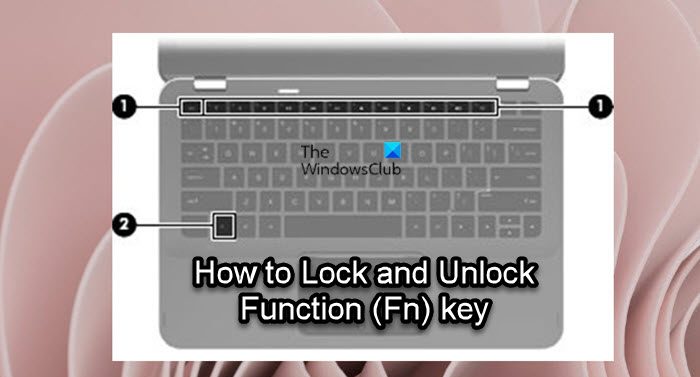 Note above in the image that the location of the fn key might vary slightly on PCs:

The Fn key is short for function – this particular key allows PC users to access the second assignment of a key. By pressing the Fn key and other function keys like F1-F12, you can perform additional functions related to these keys.

You can Lock and Unlock Function (Fn) key in Windows 11/10 in either of two ways:

Let’s take a look at the description of these methods.

The fastest way to lock or unlock the Fn key on a Windows 11/10 PC is on the keyboard itself. If the function lock key is present on your keyboard, simply press the key and the Fn key to lock Fn keys. To unlock Fn lock, repeat the action again.

The Fn lock key is represented by a lock symbol and located under the Esc (Escape) key on most standard keyboards. Although some keyboards don’t have the Fn key at all. The BIOS/UEFI Settings is another place where you can lock and unlock Function (Fn) key in Windows 11/10. Keep in mind that locking the Fn key using this method changes dual-use keys into single-use, and requires your system to have advanced BIOS options.

To lock and unlock Function (Fn) key via the BIOS/UEFI Settings, do the following:

To learn more about how to use the Fn key/F Lock key/Alternate command keys, see the Microsoft Support article.

How do I disable the Fn key on my HP laptop Windows 11?

How do I use Fn key without pressing Fn?

Read next: Backspace key only deletes one letter at a time.