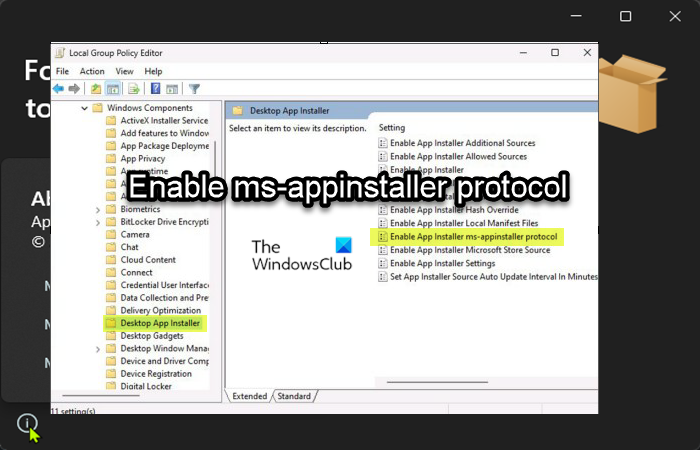 What is the ms-appinstaller protocol handler?

The ms-appinstaller protocol handler (AppX Installer) was introduced to enable users to seamlessly install an application by simply clicking a link on a website. Basically, this protocol handler provides a way for users to install Windows applications directly from a web server using an MSIX package or App Installer file without first downloading the installers to their computer.

The ms-appinstaller protocol has been disabled

However, coming on the heels of a recent announcement, it appears Microsoft has finally managed to resolve the issue, and IT admins can now safely re-enable the protocol. Microsoft had the following to say;

We recognize that this feature is critical for many enterprise organizations. We are taking the time to conduct thorough testing to ensure that re-enabling the protocol can be done in a secure manner. We are looking into introducing a Group Policy that would allow IT administrators to re-enable the protocol and control usage of it within their organizations.

How to enable ms-appinstaller protocol in Windows?

To enable the ms-appinstaller protocol for MSIX, you will need to download and install both the latest App Installer (as of this writing, version 1.17.10751.0) app and the Desktop App Installer Policy on your Windows machine, then enable the feature via Local Group Policy Editor. To perform this task, do the following:

If you’re running ms-appinstaller protocol on your website, you can update the link to your application by removing ‘ms-appinstaller:?source=’ so that the MSIX package or App Installer file can be downloaded to user’s machine.

How do I install Appinstaller on Windows 11/10?

To install Appinstaller on Windows 11/10, do the following:

What is MSIX app?

MSIX is Microsoft’s planned replacement for the MSI and AppX format. Starting with Windows 10 1809, MSIX will replace AppX as a Package-Format completely. MSIX is still undoubtedly the future of application packaging. Despite the tremendous benefits for large organizations, enterprise adoption will be slow until compatibility tools, ISV support and adequate packaging tooling gain critical mass.