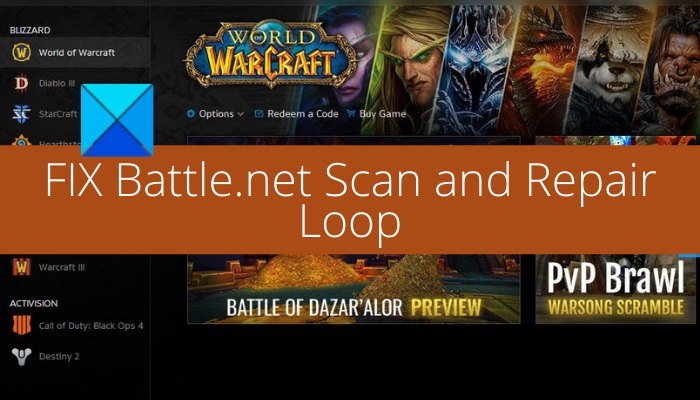 Some users also reported that after being stuck in the scan and repair loop, it ends with the following error message:

Whoops. It looks like something broke. Give it another shot.

Now, if you are one of those users facing the same problem, this post is for you. In this guide, we are going to discuss fixes that will help you resolve the issue.

Why is Battle.net stuck in Scan and Repair loop?

Here are the possible causes due to which your game might be stuck in the scan and repair loop on the Battle.net client:

Here are the methods to fix when the Battle.net game launcher is stuck in a Scan & Repair loop:

Let us discuss the above fixes in detail now!

At first, you can try some generic troubleshooting tips before trying additional fixes. Here are the things you need to which are as follows:

The issue at hand might be caused due to your overprotective antivirus or firewall. So, try disabling your antivirus and see if the problem is fixed.

It can also be caused due to your internet connection. In case you are on an unstable network connection, switch the internet. You can also try troubleshooting WiFi issues to optimize your connection. Other than that, you can check your internet speed and make sure it is good enough.

Also, make sure you have up-to-date drivers on your PC. In addition to that, ensure that you are on the latest build of your OS.

If you tried all the above tricks and the problem still persists, try the next potential fix to get rid of the problem.

Instead of uninstalling the game, you can delete small game data files to avoid the Scan & Repair loop. This will enforce Battle.net to verify the integrity of game files again and then attempt to restore the missing game files.

To delete the small game data files for Call of Duty Modern Warfare, try the below steps:

In case this solution didn’t work for you or you are experiencing this problem with some other game, no worries. We have got one more fix that will help you resolve the issue. So, move on to the next fix.

3] Uninstall and then reinstall the game

If you are encountering an issue with a particular game, the issue is most likely triggered due to corrupted game files associated with that specific game. Now, in case the scenario applies to you, the problem can be resolved by uninstalling and then reinstalling the game. Here is how you can do that:

Hopefully, this will fix the problem for you.

To fix the error code blzbntagt00000bb8 on World of Warcraft, you can try disabling your antivirus suite, switching to a wired connection for optimized internet connection, and running Battle.net client as an administrator. Apart from that, you can also use the Scan and repair option to fix the corrupted files associated with the game.

How do I enable Battle.net through firewall?

You can enable Battle.net through your firewall, you can follow the below steps: