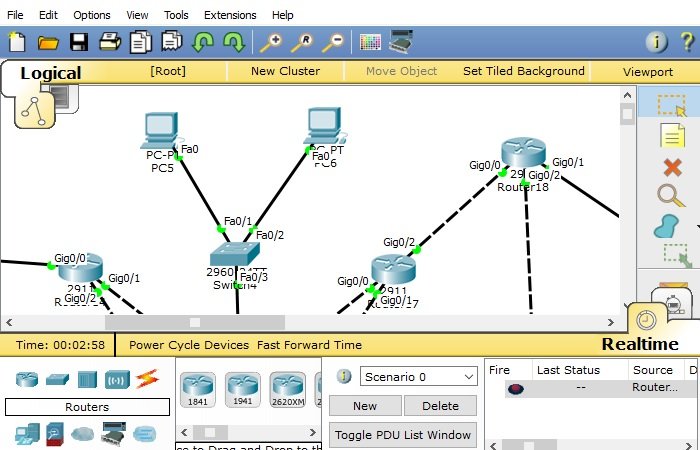 Cisco is a giant in the Networking space. Its Packet Tracer has ruled the market for ages and looks like will continue to do so.

With the help of the Cisco Packet Tracer, one can create both simple and complex circuits that can be used to replicate the real-life scenario. So, now you can implement your plans and test if the circuit is efficiently working or not without spending a penny on the hardware.

It has all types of wires be it fiber, coaxial, etc. It consists of most of the modern Cisco Routers, Wireless Devices, WAN Emulation, and many other devices that you need to create a circuit.

Another advantage Cisco Packet Tracer has over apps is that it is the very application that is used during CCNA certification training.

Some of the best free alternatives of Cisco Packet Tracer are It works on all three major platforms, Windows, Mac, and Linux, and helps the user in creating a virtual environment with devices of the same caliber to match the real world. Because of this, you don’t have to make a physical circuit without knowing that it’s working. The next free application on our list is NetSim Network Simulator. It is a simple application that can be installed on Windows PC to design a networking circuit.

It is mostly used for research and development as you can design a replica of a physical circuit without spending a penny. They have all the essential tools such as routers, switches, WinPC, IP Phone, Frame Relay Switch.
NetSim Network Simulator can be downloaded from their official website.

EVE-NG is heavy software, coming at 5.1 GB it is different from all the other software mentioned in this article.

It has a full HTML 5 UI, click and play topology, the ability to transpose real network to virtualization, and many more.

However, just like Cisco Packet Tracer, you can create a topology by using its wide range of devices.

Last but not the least, we have Omnet++. It is an open-source network simulator built on top of C++ for Windows, Linux, and MAC OS.

There are a lot of things present in this one software but we are here to talk about its network-building tool. You can add devices by either writing them yourself or just dragging and dropping, the latter is what makes it a Cisco Packet Tracer alternatives.

It has many different devices such as routers, switches, fiber, etc. One of its exciting features is that it can be built to test the new 5-G infrastructure.

Building a network with physical devices can be a bit jarring and expensive at the same time. That’s why we have Cisco Packet Tracer and its alternatives. These are the applications on which you can make a virtual network circuit check if it’s working and then construct the conclusive network to be efficient. Hopefully, this article has helped you in finding the best Network Simulator tool for your networking needs.