Singularity is a Microsoft Research project to build a highly-dependable microkernel operating system in which the kernel, device drivers, and applications are all written in managed code. More than 90% of the OS kernel is written in Sing#, an extension of the C# high-level programming language. 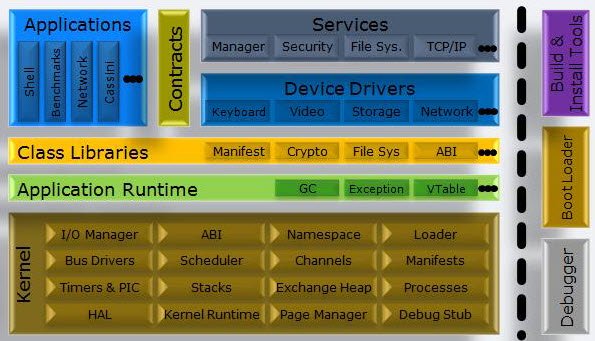 Singularity is a research project focused on the construction of dependable systems through innovation in the areas of systems, languages, and tools. We are building a research operating system prototype (called Singularity), extending programming languages, and developing new techniques and tools for specifying and verifying program behavior.

Singularity uses these advances to build more reliable systems and applications. For example, because SIPs are so cheap to create and enforce, Singularity runs each program, device driver, or system extension in its own SIP. SIPs are not allowed to share memory or modify their own code. As a result, we can make strong reliability guarantees about the code running in a SIP. We can verify much broader properties about a SIP at compile or install time than can be done for code running in traditional OS processes. Broader application of static verification is critical to predicting system behavior and providing users with strong guarantees about reliability.

Microsoft Research has made available for download, the Singularity Research Development Kit (RDK). You can download it from CodePlex, Microsoft’s open source code project hosting website. You can also download Overview Of Singularity Project, by clicking here.

Microsoft Research Singularity  was stared in 2003 as a totally new approach to OS building.