To understand why one would want to know how to force WiFi to connect over 5GHz in Windows 11/10, we must begin by knowing the difference between 2.4GHz and 5GHz WiFi. Once that is clear, we will learn the ways to achieve that. Let’s get into it!

What Is The Difference Between 2.4GHz And 5GHz WiFi?

A WiFi router uses radio frequencies. These radio frequencies transmit the internet to your devices like laptops, smartphones, tablets, and many others. The primary and distinguishing difference between 2.4GHz and 5GHz WiFi is their range and bandwidth or speed. Yes, the speed of your internet does depend on the internet plan you must have chosen, but it also depends on your router capacity.

Read: How to check if Windows laptop supports 2.4 or 5 GHz WiFi.

Force WiFi to connect over 5GHz in Windows 11/10

If you notice that your WIfi router is running slow and the internet speeds aren’t up to the mark, it might be because you are using the 2.4GHz band. You can change the band your wireless card will connect to in the future. It can be done in the advanced driver settings in the Device Manager.

If you don’t wish your device to connect to the 2.4GHz band, you can disable the associated bands. 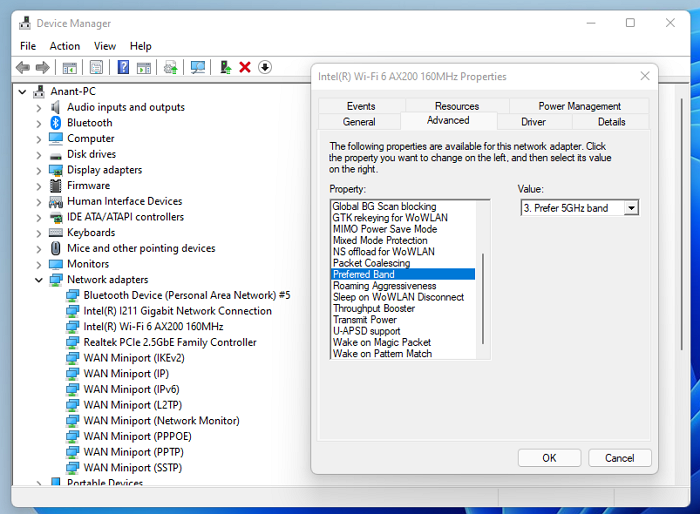 Depending on your wireless router’s manufacturer, you will be able to access a Windows supplicant/application to drive your adapter. But remember that the embedded Windows supplicant will not deny a connection in the future. It means that even if you specify your preference for 5GHz, it will connect to the 2.4GHz to maintain the connectivity if it goes south.

Why can’t I connect My Device to A 5GHz WiFi Router?

Often, the hardware of your device may be responsible for this. If it doesn’t support 5GHz bandwidth, you won’t be able to connect to the 5GHz WiFi network. It could also be the other way, and it’s your WiFi router that doesn’t support 5GHz bandwidth. Another reason could be an incorrect setup of your device and WiFi router or that you installed the wrong/outdated drivers.

Fix: 5GHz WiFi not showing up on Windows.

When setting up WiFi on your router, look for the band option. If already set, then edit the connection, and then change. It will vary from OEM to OEM but is usually available when you edit the WiFi options.

You have learned how to force WiFi to connect over 5GHz in Windows. Go on and try it out on your device, and let us know what worked for you.

Read: How to switch between 2.4 GHz and 5 GHz Wi-Fi bands in Windows.