There are a number of slangs circulating on the Internet, they are an integral part of the Internet lingo and also our lives. And most of the time, we jumble the terms or get confused by them. However, slangs save us time. So, in this article, we are going to talk about some of the most common slang and see why and when should they be used. 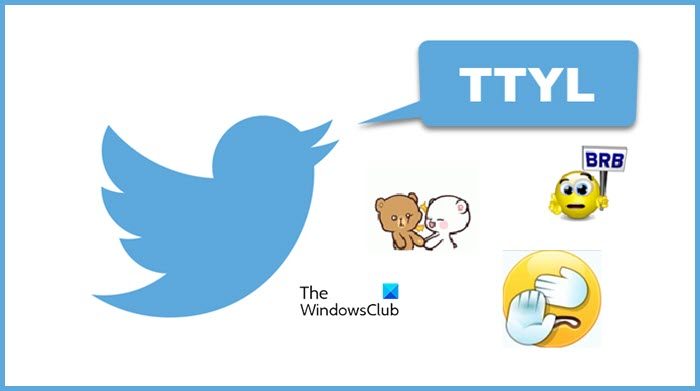 In this article, we have jotted some of the abbreviations used for slang that are pretty common.

Let’s start with the first one. If you are wondering why your friend isn’t responding after simply texting TTYL, then let me clear the meaning behind it. The sender wanted to tell you they’ll talk to you later. The best way to get out of the tetchy or patchy situation is by saying TTYL. You can end the conversation without hurting others’ sentiments.

Be right back, no no I’m not going anywhere, by “Be Right Back”, what I meant is that it’s the full form of BRB. It is one of the common short forms that we use nowadays. Yeah, I know, we can’t even right three words. However, sometimes, in desperate times, we even try to shorten our names, so the acronym for Be right back, BRB needed. And it is better to text BRB than to ghost them.

3] YMMV – Your Mileage May Vary

We all know that people’s opinion is not always the same, you may have a completely different opinion on a matter than mine. But saying this directly to the crowd with different opinions is not the way to go. So to keep it short, “Your Mileage May Vary” is the way to go. This won’t make the crowd uncomfortable as it also stops any unnecessary fight from brewing, common when others try to impose their opinion on you, which is more often than not.

I think you are familiar with this acronym, BUMP. And if you are not then I do hope that you have seen this word on Facebook, Tumblr, Twitter, etc. BUMP means Bring Up My Post.

If someone is using your own words against you then it’s better to say BUMP. We don’t have all the time in the world to repeat ourselves, again and again.

IRL stands for In Real Life. You can use it when you want to share your personal life or daily routine online. IRL is one of the most common initialisms used in the history of acronyms. However, nowadays youngsters are using it to relate themselves to some videos, scenarios, and such like.

If you are reading and reading but the message, email, chat, or whatever is not ending then you know what to text, TLDR, Too long, Didn’t read is the way to go. A very witty way to replace summary is by writing TLDR.

Okay, Don’t go posting TLDR on this article though.

7] TMI – Too Much Information

If you are not comfortable with your friends preaching their love lives or something equally uncomfortable then stop them by saying TMI. Not every detail is worth mentioning and sometimes, people forget that.

TIHI (Thanks, I hate it) is the closest slang to TMI but it is not what most people would love to hear. Thus this slang is not needed or accepted most of the time.

We Been Knew is a grammatically incorrect slag used by people who can’t say “Obviously”. However, there are some merits of using WBK, it adds a layer of sarcasm to your overall message. So, next time, when you see some random privileged guy giving tips on social media, just type “WBK, WBK”.

If you are a gamer, then you can skip this one, because I am pretty sure that’s what you call your team when playing a multiplayer combat game such as PUBG or Fortnite. If you are just an average user, and someone asks you to join their Squad, then you should know that they are lending you the hand of friendship.

Poets have been creating words to glorify the enchanting beauty of their lovers and calling them by some of the most mesmerizing names present in that very language. Well, GenZ Keats and Shakespears of the world have their own word that is a bit less metaphorical and more straightforward than “Envy of Moon”. Bae is the word you can use to call your lover, pretty convenient, isn’t it?

These were some of the most common slang that you can use while chatting on the Internet.

What does UwU mean? UwU is an emoticon that translates to a cute smiling face. Usually, the social media platform you are using turns it into an emoji or a GIF, but sometimes, it doesn’t. Now, whenever, someone sends UwU, you know what they mean.

What does OwO mean in Roblox?

OwO is an emoticon depicting shock. It is not very common outside the Roblox bubble. But if you are one of the users of the service, you can now understand what the other person is trying to convey. This expression is of shock but in a very juvenile manner.