Missing some of those old popular features from Windows 7 or Windows 8/8.1 after upgrading to Windows 10? Missed Features Installer or MFI is a free-to-use application that will let you add the missing, removed, dropped or deprecated features from older versions of the OS to Windows 10. It has always been an issue of debate whether to or not remove any features from older versions when a new version of Windows OS is launched. Each of these Windows versions has come up with numerous new features. However, when the Windows OS version is upgraded to a newer version, most of the features from the older version are discontinued. Wherein it’s a good thing most of the time; some users want to have these features even in newer versions of the OS. Normally, it’s not possible to get those features back in the latest versions; but Missed Features Installer will help you get those features such as games, apps, and tools even in the newer versions of Windows.

Simply put, Missed Features Installer or MFI can bring back the deprecated features for you. For example, those who were using Windows Vista, missed many features of it when they upgraded to Windows 7. Some of these features were Quick Launch Toolbar, DreamScene, and Media Player taskbar toolbar, which were no more with Windows 7.

The same was the story with Windows 8. Windows 8 was a complete makeover of Windows 7. The first thing users missed was the Start Menu button. However, it was brought back to Windows 8.1. However, there were still some features such as Desktop gadgets, Aero Glass, Windows Experience Index, and some legacy games from Windows 7 are no more seen in Windows 8 and Windows 8.1.

How to use Missed Features Installer

Installing and using Missed Features Installer is pretty straightforward. However, the only drawback this tool has is its size. The MFI tool’s size is more than 500 MB, and its considerable time to download. Apart from that, using the tool is quite easy.

After downloading the tool, you can see its home page as follows: Different tabs on the home page lead to different features which can be installed on your Windows 10 PC, such as Start Menu, Aero Glass, different Gadgets, and Games from XP, Vista, or Windows 7. Missed Features Installer also lets you install the .NET Framework version 3.5 also. Other tools on the home page include Visual C++, Windows Media Center, Destroy Win Spy, Install My Language, RSAT, and several more. The process to access these tabs is simple. For example, if you wish to install Start Menu on Windows 8, then simply click on ‘Start Menu’ tab. The tool installs the Start Menu on your machine. If you wish to have those good ol’ games, then click on ‘Games’ tab. The tool will install all your favorite games from previous versions of Windows to Windows 10. Now you can see the following games on your PC, thanks to Missed Features Installer. Remember these games?

The tool is simple and installs all those old features that are no more present in Windows 10. While there may be valid reasons why these old features were deprecated in Windows 10, those of you who want them back may download the tool from the official website <Link removed as the project has been taken down for some reason> of Missed Features Installer. Remember to create a system restore point first before using it!

Can you enable removed features of Windows?

Technically No. If the features have been removed or deprecated from Windows, bringing them back will only break existing functions. Most of the software that helps enable those features asks you to change registry entries or install another software. It may work, but it may not be safe. So it’s best not to enable it forcefully. Instead, a better choice would be to look for legit software that can help you with similar features without modifying anything.

Why does Microsoft remove some features from Windows?

It usually happens when there is a significant update. Removal is based on users’ feedback and Windows insiders, and as new features roll out, older ones get outdated. So while some people get annoyed that a feature is removed, it often happens based on more extensive feedback, and another option is given later. 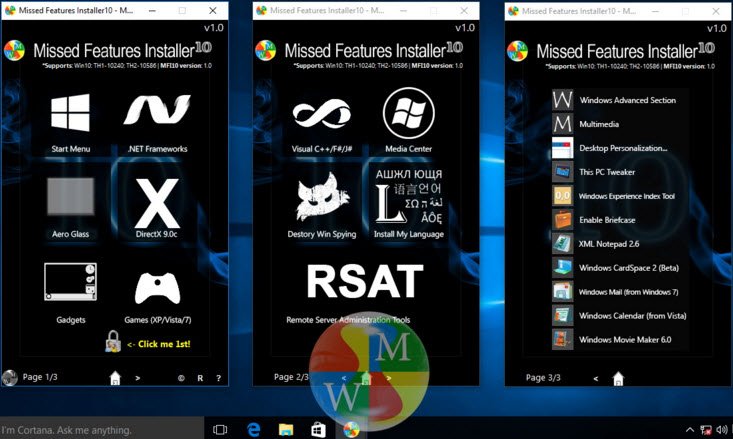